I realize I have somehow become the poop mom blogger, but seriously, I can’t be the only one with kids like these…

My baby is new to this poop party. He just started eating baby food so his diapers have been full of surprises. As I’m busying myself with something probably not all that important, I look over at Baby to see through his outfit that the poop had exploded out of his diaper and onto his back. “Who’s going to change him?” I offer to all my kids. No one takes the bait. Time for a bath!

I oh-so- carefully unbuttoned, rolled and pulled the darling yellow shark jumper over Baby’s head, yet somehow still managed to get it on his feet, his hair, my elbow, my hand and the bathroom floor. Not to mention, Baby can’t sit still, so as he is trying to grip his feet into the tile floor, he keeps slipping and spreading the poo everywhere. Someone, (it was probably me) was screaming, “Stop! Gross! Ah-crap!” Repeatedly. 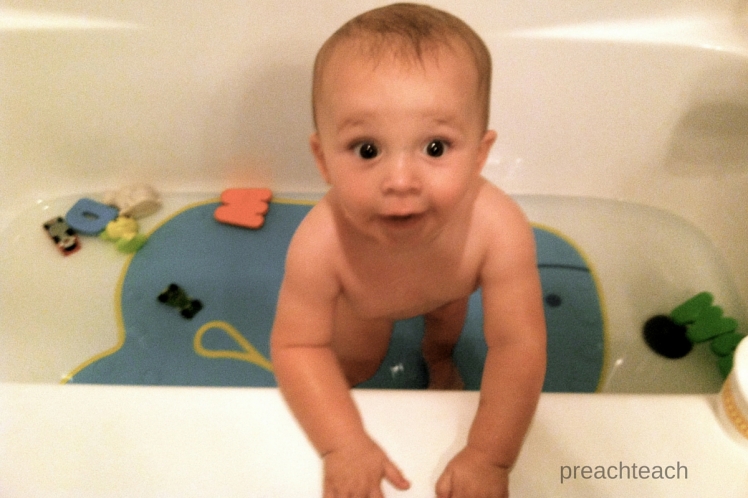 Once I had Baby naked and wiped clean, I put him in the tub, grabbed some toilet paper and started wiping the stray poo up around the bathroom. I opened up the toilet to flush the final remnants of the explosion, only to find an entire roll of toilet paper had been ripped, piece by piece, and thrown into the potty. Clearly, this overflowing mass of tissue was not alarming enough for two boys to stop and think, “hmm… this looks clogged, maybe I should use a different potty.” Or “hmm.. looks flooded. I should tell mom about this.” Nope. The toilet was still okay to go pee pee in, clearly!

Instead, I had to try to teach my two-year-old, newly potty-trained daughter, that you don’t throw an entire roll, including the cardboard piece into the toilet.

I had to educate my seven-year-old son, for like the millionth time, that he needs to be better at listening to his body. That he should be able to give himself enough time to see if the toilet is working, that he should need to stand for a couple seconds before the pee comes out, and that, for the love of all things, he should never, ever pee anywhere but the inside of the toilet. (I mean, really, is it that hard?!).

And then, I had to listen to the explanation of my five-year-old as to why the clogged toilet may actually be my fault. My fault because I made him go into the bathroom and clean his bottom. “I had to use the wipes.”

He points. I gaze in the direction of his finger and land on the blue container of Lysol wipes sitting on top the toilet. “You wiped your butt with these wipes?”

“Yeah, but they didn’t flush.”

“Did they hurt? Did it sting your bottom? Those wipes aren’t for butts.” Flabbergasted, I know I rambled for five minutes, at least.

“Well, you said to clean my butt.”

Well, I guess next time I’ll be more specific.

Today I’m thankful for bathtubs, a husband and his plunger, and apparently, Lysol wipes.

Until the next poopy adventure,

6 thoughts on “Another Poopy Day”