As a teacher, I always had a tender heart for “The Bully.”  See when you’re an adult, it’s easy to rationalize the actions and reactions of a child.  Whether he’s acting out for the attention he doesn’t receive at home, or she is saying nasty things because she has trust issues. That superhero always wanted to come out of me, wave a wand, and take away their strife and worry.  Just hug them and allow them to be a carefree and happy little nine-year-old.

But the truth is, bullying is for real– and it’s a big deal. Often times with scary results.  Yesterday in Des Moines, (Tuesday 11/27/12) Governor Branstad held the Governor’s Bullying Prevention Summit #nobullyia.  There were 1,100 in attendance, 1/3 of which were students.  I read some of the statistics that were shared during that summit:*

1/4 of kids DO NOT tell an adult if they’re being bullied.

2 in 5 parents say kids are cyber-bullied

2 in 9 suicides are caused by bullying.

In the past couple of years, “Bully” had become such a taboo phrase around the kids at my school.  They’d get accidentally bumped in the hallway and come say, “I’m being bullied.” Or they wouldn’t want to be partners with a certain person and say, “I can’t be so and so’s partner because they bully me.”  Granted, you don’t want to take claims lightly.  But at the same time, you don’t want kids just throwing around such a serious acquisition.

Due to this situation (and many others!) my school counselor, Katy, and my team of other fourth grade teachers took time to identify the definition of bullying and created this Bullying Spectrum in order to help students self-evaluate the situation in which they found themselves.  Through the whole process of dealing with ‘bullies’ in school, we realized it took a lot of direct instruction and TIME!. 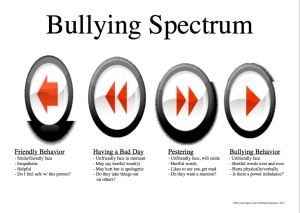 I truly believe at the heart of it, kids both big and small, don’t want to damage others.  I had a little boy in my class one year who was just the nicest and most caring individual.  He was smaller than all the other kids and really didn’t identify with any of his peers, but he genuinely LIKED everybody.  One day, I caught him erasing something behind his name on our morning message board.  I asked him what that had said, knowing it was something like, “smells” or “stinks.” All he said was, “someone probably just made a mistake.”  WOW- that really cut me at the heart, the amount of forgiveness this boy had in his soul.  So, that day I arranged for the counselor to take him for something special, and while he was out of the room, I addressed the issue with my class.  Boy oh boy, did they open up about how they had all been picking on him, how they’d been mean to him because they thought it was funny.  They all knew how nice he was, and as 9 and 10 year olds do, easily realized they were taking advantage of him.  They felt bad, and not because I made them or punished them. But because they realized that being mean isn’t funny- it hurts!  When that little boy came back to the classroom, the kids made genuine efforts to make him feel like a friend- not just that day, but each day after that- Honest!

So what will END bullying?

Do we just need to learn more about each other? Erase ignorance into appreciation? Turn diversity into acceptance?

The summit speakers stated that it takes a community to end a bullying culture. Also that conflict and bullying are two separate issues- conflict is expected, bullying is not.

How can a community change a culture of bullying?

Are we parents allowing our children to cope with conflict?  How can we make them better and more confident problem-solvers?

Is it the responsibility of teachers, schools, and/or legislation to end bullying?  What is the role of each?

What do you think?

I don’t know the answers, but I pray I enable my own children to take a stand against what they feel is wrong.  I’ll leave you with this powerful video created by Waukee High School students.

3 thoughts on “There’s a Bully in my Classroom!”